1900- The swimming events produced unusually fast times because the events were swam in the River Seine and swum with the    current. Most the winners did not receive the medals, but rather cups and trophies.
1908- First Games at which Gold, Silver, and Bronze medals were rewarded to the first, second, and third place finalists. Boxing and Freestyle Wrestling were added to the Olympics.
1908- Marked the first appearance of diving, field hockey, and figure skating.
1912- Women's events of swimming and diving were introduced. 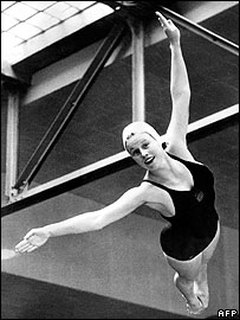 Thirteen-year-old, Marjorie Gestring, of the US won the gold medal in the spring board diving and remains the youngest female gold medalist in the History of the Summer Olympics.
Powered by