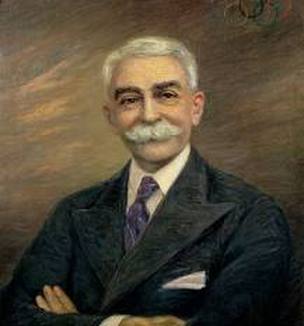 Although many attempts were made to create a modern revival of the the Olympics, Barron Pierre de Coubertin of France was the first person to possess the perseverance and organizational skills to make the Olympics come back. Inspired by a model of the ancient Olympia that he saw on display while touring the 1889 Paris Exposition, Coubertin decided to revive the Olympics. While touring a sports conference in 1892, he proposed the idea of the renewal of the Olympic games.  The committee rejected his proposal, and by 1894 he called a conference of his own and the project was launched. Initially, Coudertin suggested that the games be help in his home town of Paris in 1900, but the Greek support was so enthusiastic about the Games that the date was moved to 1896 and the site was shifted to Athens, Greece.  Financial support was lacking from the Greek government. So, the Greek Organizing Committee led by Prince Constantine, raised money by selling souvenir stamps and medals. A wealthy businessman, Greorgios Averoff, donated 1 million drachma. The donation went toward the reconstruction of the Athens' Pananthenaic Stadium, which was originally built in 330 BC. Although it was the Greeks who ran the show, it was Baron de Coubertin who created the form of the games, including the Olympic Charter (in 1908) and the Opening and Closing Ceremonies. He served as president of the International Olympic committee from 1896 until 1925. On April 6, 1896 King George I of Greece declared open the first Modern Olympics. There were 245 athletes, all of them men from fourteen different nations. These men competed in forty-three separate events.
Powered by